Joseph studied privately with Böhm for more than two years before enrolling at the Conservatory. His name appears as a registered student there for a short time only — during the school year 1842-1843 — and then, only as a member of Böhm’s advanced violin class. He seems to have been regarded in other ways as a special student. Published conservatory records show this as his first year, with an obligation for one more — an obligation never fulfilled. Otto Gumprecht tells us (presumably upon consultation with Joachim himself), that “during the three years that this relationship [with Böhm] lasted, he diligently attended the Vienna Conservatory, without, however, being an official pupil of the institution. He took part, with particular eagerness, as a section leader in all the orchestra rehearsals.” [i] At the end of the year, Joseph received top grades for diligence, progress and morals.

The Conservatory orchestra was conducted by Gottfried Preyer. For Karl Goldmark, whose conservatory study was cut short by the revolution of 1848, Preyer’s orchestra rehearsals were “the most important” part of his education, rivalled only by his attendance at Jansa’s string quartet concerts.

Both… revealed to me, if only slightly, a new world; the world of Haydn, Mozart and Beethoven. It is characteristic of the time, that there were no orchestra, vocal or song concerts [in Vienna].

The Concerts spirituels that had been founded by the Gesellschaft der Musikfreunde, as well as the Nicolai Philharmonic concerts had been discontinued. And so, there were only virtuoso concerts, with their — mostly questionable — opera fantasias. One of the most painful misjudgments of artistic greatness was an opinion — that has remained fixed in my memory — by our excellent teacher of harmony and counterpoint, Gottfried Preyer… One time he had us read the first movement of Beethoven’s Ninth Symphony. At its conclusion, he said: “My dears, you must not be too astonished by this piece. Beethoven was by that time no longer completely in his right mind.” — This happened twenty years after Beethoven’s death. And, relating this, I am not saying anything bad about my good, capable teacher — that was pretty much the general opinion.

“A man of recognized abilities, solid skills and musical knowledge, theoretically and practically a proficient musician,” [iii] Gottfried Preyer was born in 1807 in the out-of-the-way lower-Austrian town of Hausbrunn. He received his earliest musical training (in singing, violin and piano) from his father, a schoolteacher and choir director. He later studied music theory and composition with the renowned Imperial and Royal Court Organist Simon Sechter, the man with whom Schubert had hoped to study at the time of his final illness. Preyer became professor of Harmony and Counterpoint at the Vienna Conservatory in 1839, conductor of the Conservatory orchestra in 1840, and the Conservatory’s first director in 1844. (Prior to Preyer, the Conservatory had been directed by a committee.) In 1852, he was named Regens chori of St. Stephen’s Cathedral. In the decade of the ‘forties, Preyer taught all of Böhm’s remarkable young Hungarian-Jewish violin students, including Joachim, Singer, Pollitzer, Reményi, Grün, Straus and Goldmark. Preyer lived in Leopoldstadt, near Joseph’s relatives. He gave Joseph private lessons in theory and composition [iv] following Sechter’s thorough-bass approach. [1] A man of deep culture, a lover of music, books and art, he was still a young man in his thirties when Joseph studied with him. One of Joseph’s early letters mentions Preyer, and hints at a warm relationship between them. [v]

Gottfried Preyer was much honored in his lifetime, receiving medals and awards from the Emperor and the Pope. He was elevated to the nobility in January 1894, and was subsequently known as Gottfried von Preyer. Following his death in 1901, he was buried in Vienna’s Zentralfriedhof near Beethoven, Schubert and Brahms. Nevertheless, he is remembered today for none of these pre-eminences so much as for a singular act of philanthropy. Walking one cold night through the scrub brush on the Laaer Berg (a hill in Vienna’s Favoriten district), Preyer encountered a distraught woman cherishing her dying child in her arms. This shattering experience moved the childless man to bequeath his large fortune of two million goldkronen for the establishment of a children’s hospital. [2] The Gottfried von Preyer’sches Kinderspital, which opened near the Laaer Berg in 1914, closed its doors in 2016. 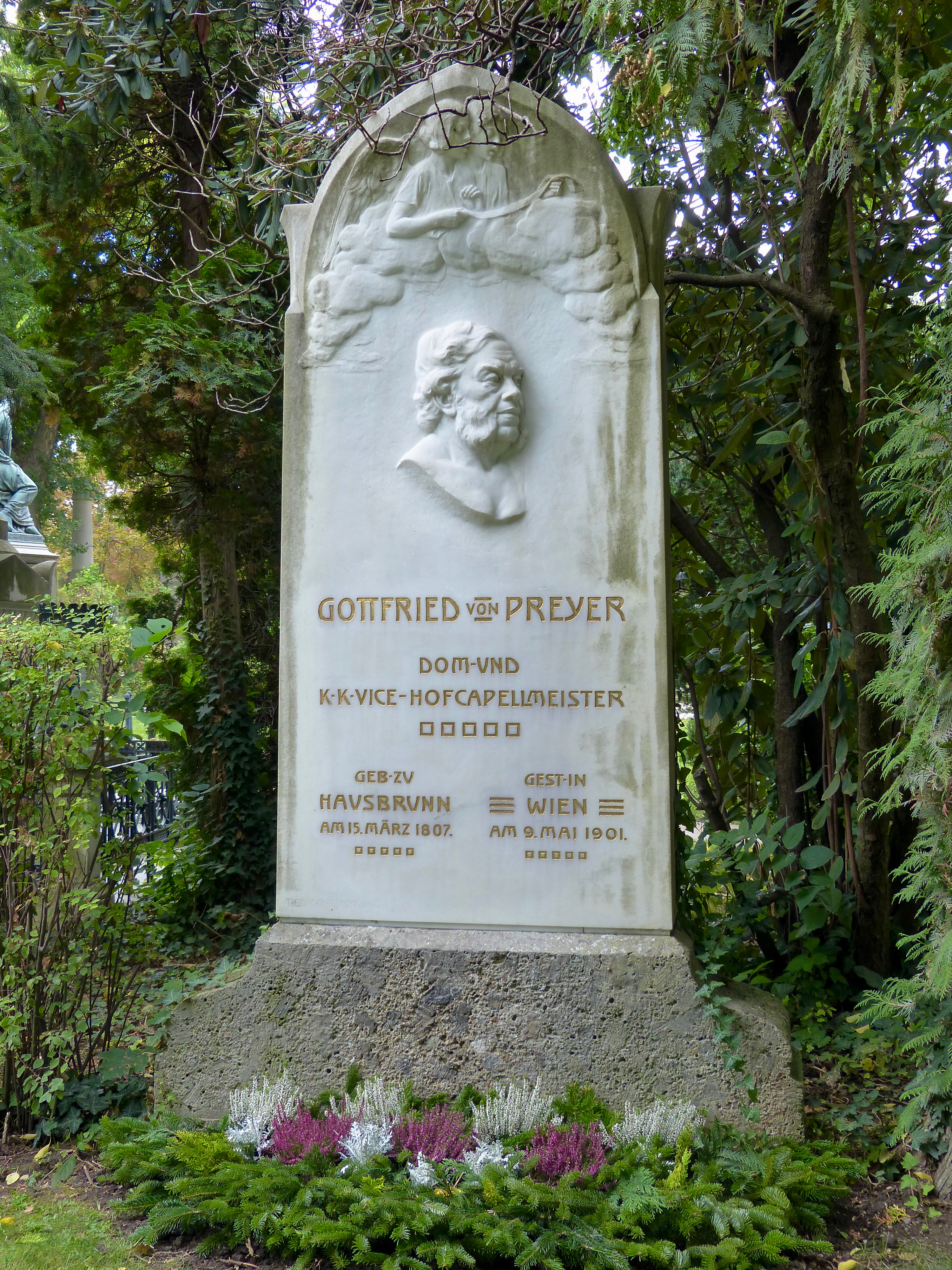 [1] Simon Sechter’s approach, a revision of Rameau’s fundamental-bass theory, is laid out in his Die Grundsätze der musikalischen Komposition (3 vols., Leipzig: Breitkopf & Härtel, 1853-1854). An English adaptation of Sechter’s work was published by Carl Christian Müller in 1871.