From Ethel Smyth: Impressions that Remained 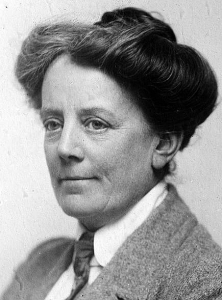 f the Joachims I saw a good deal. She was the finest contralto I ever heard, and until she got too fat, the Orpheus of one’s dreams. Joachim according to all English people was of course perfection, but I saw him in another setting and never wholly liked him — perhaps among other reasons because trouble was even then brewing in his house and all my sympathies were with the wife, who, though socially far less than satisfactory than her husband, was a warm, living human being. I wished she would not crawl under the supper table in a fit of New Year jollity, armed with a hat-pin, but why did Joachim allow it, I ask myself. Why did he sit there serenely at the head of the table looking like a planed-down Jupiter and utter no remonstrance? In a certain letter Rubinstein’s answer to this riddle may be found, though obviously grotesque, it proves that I was not the only Joachim-heretic in the world. That evening Joachim told me he had just heard Melba, and raved about her; “How can one speak of coldness,” he asked, “in connection with such phrasing?” Perhaps he knew that the same accusation was often levelled against himself, and in both cases it is obvious what people meant — the “coldness,” compared to Renaissance work, of the Delphic Character, which is not to everyone’s taste.

… And this man [Anton Rubinstein] maintains in his blind madness the German “inwardness” (Innerlichkeit) means nothing, or rather is another word for impotence, whereby of course he is thinking of Brahms! He said some nice things about the ugly Joachim affair, and thinks he started the whole business in order to marry an English Lady Somebody! “If that is so,” he added grimly, “then I have no use for his Beethoven Concerto and his inwardness and all the rest of it!” Though this is nonsense from the point of view of art, humanly speaking it was warm and sympathetic, and I was glad to hear the frivolous R. talking in that style.

I have not told you, I think, that Frau Joachim has been here and that I visited her in her hotel. I considered it my duty, though it wasn’t easy, for I dreaded what the impression might be. But it was good beyond all expectation; she threw her arms round my neck, sobbing, and was so simple — merely the mother, the lioness robbed of her cubs — that I was deeply touched. Still I cannot get rid of the feeling that she has let herself drift in the direction of cheap, trivial, sentimental yearnings, and gazed forth right and left with moderate lust of conquest; not with any evil intention, but after the fashion of people whose souls are poorly furnished. Things are different now; I think sorrow has ripened and ennobled her, and that took hold of me. Her despair when she speaks about the children (they have taken the daughters to England) is so touching. Imagine! not a soul, except Frau O. and myself went to see her, and in Berlin everyone cuts her — so cowardly and evil is the world! And the worst of all are the virtuous women, who make me perfectly furious. [1]

[1] Later, when Herzogenberg accepted a post offered him by Joachim at the Hochschule, Lisl did not call on Frau Joachim, who was still living in Berlin. [Original footnote.]