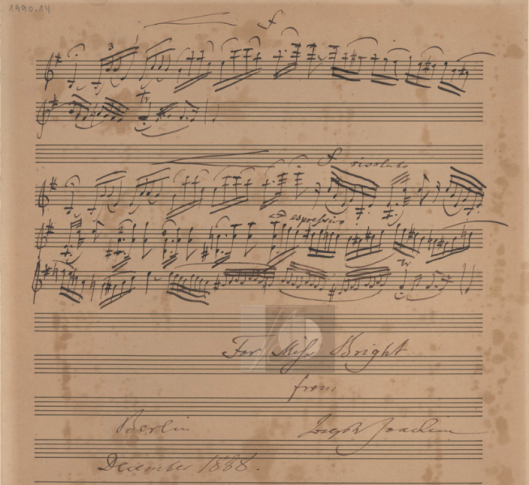 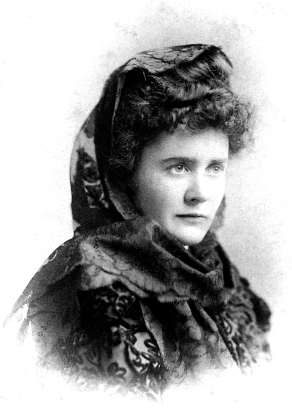 From: Esther Bright, The Ancient One: To the Young Folks at Home, London: The Theosophical Publishing House, 1927, pp. 50-51:

One most painful experience I had with him [Joachim], which gave me the keenest suffering. My lesson was at 9.30, but I usually sat listening to the boy who came before me at 9. One day, I was feeling very nervous, and thought I would go into an empty room to play over my concerto once more before my lesson. At about 9.20, the door suddenly was thrown violently open and Joachim appeared on the threshold in a state of heated indignation. “Wo sind Sie denn? It suche Sie überall.” “I have been running over the whole school looking for you!” The boy who took his lesson before me had not turned up, so Joachim was waiting for me.

I was rushed into his classroom. He sat in his chair. I, unfortunate and most unhappy girl, stood in front of him and listened — it seemed to me for half an hour ; it may have been five minutes — while he denounced me! “I do not give my lessons by the yard!” he kept saying when I tried to explain that my actual hour was 9.30. It was no good, so I just stood quiet and very icy and cold in

my heart, bearing the avalanche which swept over me. At last he grew quiet “Na, na, kommen Sie nur.” And I was expected to play after that! I suppose I did play, somehow or other. He was then very soft and gentle, and at the end of the lesson, perhaps realising my inwardly prostrate condition, though I tried to appear calm and dignified, asked me to come to lunch the next day. I left the classroom. Enough for the day!

That was the only time Joachim ever ill-used me. It was very distinctly ill-usage, and I think he realized it. Next day, I went to lunch at his house, and he showed his remorse by presenting me with a cadenza he had composed specially for me to the Nardini Sonata I was studying with him! It was copied out in his own handwriting. I was touched and surprised and grateful, but the suffering of that half hour lasted a long while. I have the cadenza framed. He had signed it “From Joseph Joachim,” and put my name on it.