Digital Library of the University of Łódź, Poland.

The manuscript, which was part of the Joseph Joachim Nachlaß at the Berlin Hochschule für Musik, was sent, along with other materials, to Poland during the Second World War. Christoph Wolff details his discovery of the collection in his 1989 article. 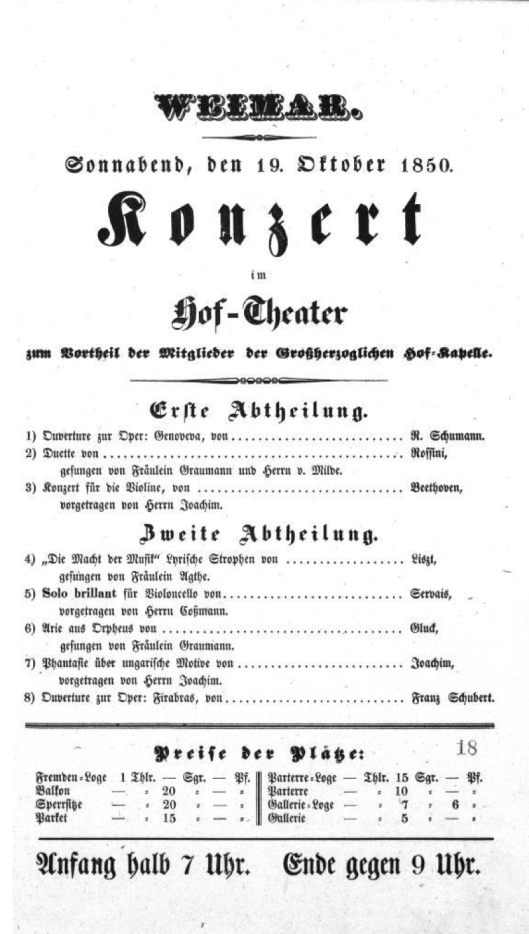 Joachim gave the premiere of the Phantasie über ungarische Motive in Weimar on October 19, 1850. He gave further performances of the piece during his English sojourn in 1852 (Oxford, Sheldonian Theatre, June 23, and London, Hanover Square Rooms, June 25). On June 26, the London Daily News reviewed the latter concert:

HERR JOACHIM’S CONCERT.—This distinguished violinist gave a concert at the Hanover-square Rooms yesterday evening. His principal performance was Beethoven’s Concerto for the violin, in which he was accompanied by a full and excellent orchestra. He played it magnificently in every respect—in tone, style, execution, and expression. At the close of the first movement he introduced a new Cadenza of his own—very long, elaborate, and full of enormous difficulties, which he surmounted triumphantly; but it was more wonderful than pleasing, as it did not seem to flow out of the subject, and was deficient in melody. A Fantasia on Hungarian airs was a most marvelous display of executive power; but Mr. Joachim shines more as a performer than as a composer. His themes had less national character than many Hungarian airs that we have heard, nor was there anything characteristic in his treatment. It was, however, a perfect piece of violin playing, and, as well as his other pieces, was enthusiastically applauded. There was a numerous audience and a great many musical notabilités were present. M. Ferdinand Hiller officiated as conductor, and among other eminent personages in the room, we observed Dr. Spohr and the Chevalier Neukomm. 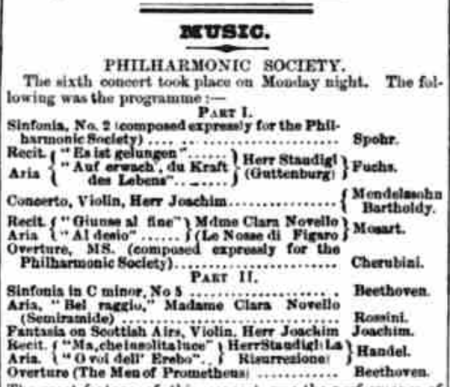 The first performance of the Fantasie über irische Motive [recte: Fantasia on Scottish Airs] was given with the Philharmonic Society of London on 31 May, 1852. The program also included Mendelssohn’s violin concerto. The performance occasioned one of the few truly bad reviews that Joachim ever got, in Bell’s Weekly Messenger, June 5, 1852: “Herr Joachim’s playing of Mendelssohn’s concerto, no less than of his own composition, much disappointed us. From the promise which this gentleman gave, when quite a boy, and when last in England, we fully expected to have found much greater improvement in tone and finish than he indicated. His reading of the first and last [movements] of the Mendelssohn concerto was bold and vigorous; but there was a roughness of bowing, a thinness of tone, and an occasional failing in the intonation, which destroyed the effects intended by the composer. The andante was better played; but even here the manner to our minds was not comparable with that of Mr. Cooper, who performed the same composition two years ago at one of these concerts. Herr Joachim is still young enough to improve, and we trust his visit to England will be the means of inducing him to observe the manner of such violinists as Sainton, Sivori, Blagrove, Cooper, and other artistes, whose talent and finish are equal to their execution. From constant playing upon the Continent, where boldness of manner is more applauded than delicacy of execution, he has fallen into a style which requires to be entirely remodeled ere he can be pronounced as one of the most eminent violinists of the day. In his second performance the composition was so mediocre as almost to defy criticism, and his playing, partaking of all the defects manifested in the first concerto, made it even more disagreeable.”

The London Evening Standard [June 1] was more charitable: “In the violin concerto of Mendelssohn, Herr Joachim came in almost immediate rivalry with Sivori, who played the same work last Friday night at the New Philharmonic Concerts. Each artist, however, had a specialty of his own. The fine bowing of Herr Joachim, and his pure musician-like style, were brought into noble requisition, and the concerto had thus every advantage belonging to a highly-refined taste and the most susceptible intelligence. The performance, in a word, was masterly; and the applause, consequently, was loud and vehement. The exquisite slow movement was rendered by this young and diligent artist with a fervour strongly suggestive of the passionate intensity of Ernst. We could not desire a more intellectual or poetical reading. His fantasia in the second act, founded on well-known Scottish airs, was of a more popular complexion; but equally favourable for the display of those fine qualities of style, mechanism, and expression, which every violinist acknowledges him to possess.”

The Morning Post [June 1] wrote: “In the fantasia on Scotch airs, the eminent violinist not only displayed his wonderful digital dexterity to the fullest extent, but proved at the same time, by the general excellence of his composition, that he possesses qualities entitling him to a much higher artistic rank than that of a mere executant. The fantasia, in addition to being so constructed as to exhibit most effectively the special powers of the leading instrument, is consistent in design, and offers, in its harmony and instrumentation, much to interest and charm the classical musician. The mechanical difficulties of this composition are enormous, but Herr Joachim mastered them all with a skill bordering upon the miraculous; and we could not but join heartily in the rapturous demonstrations of approval with which he was honoured.”

Of the Fantasia, the Examiner [June 5] wrote: “In his fantasia he introduced two Scottish airs, and played them with true feeling. But this second performance was altogether de trop. One violin piece is enough for one evening. A second, and from the same hand, argued a poverty of resource, or a want of the means of procuring aid; and as the Society is affluent, we are compelled to impute the error to a failure in the activity or in the judgment of the directors.”

The Morning Chronicle [June 1] compared the Mendelssohn interpretations of the “Teuton” from Prague (!) and the Italian, Sivori, but failed to mention the Fantasia at all. 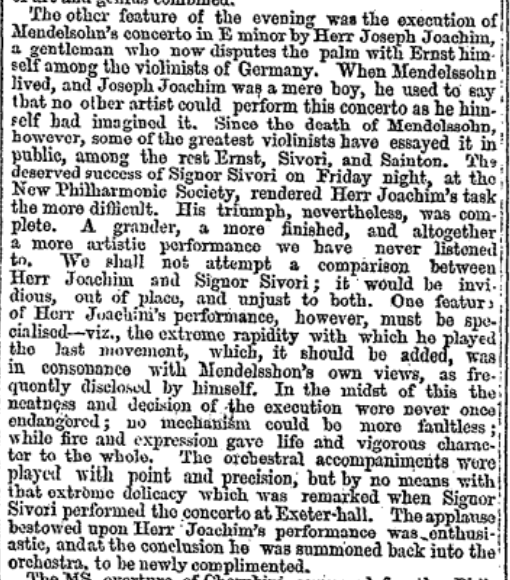 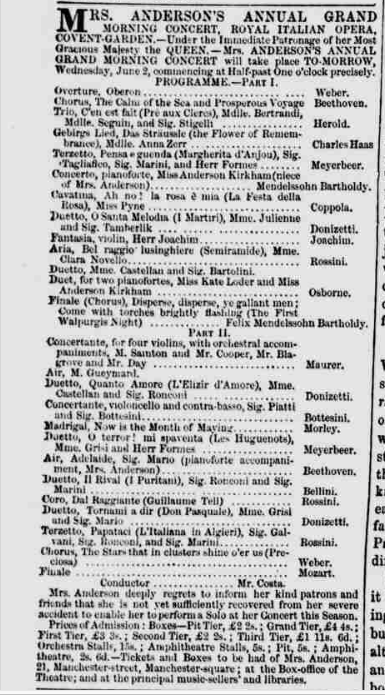 Joachim performed the Fantasia again a few days later [Wednesday, June 2, at 1:30 p.m.] at “Mrs. Anderson’s Concert Annual Grand Morning Concert” “Under the Immediate Patronage of her Most Gracious Majesty the Queen” at the Royal Italian Opera, Covent Garden. Bell’s Weekly Messenger [June 6] reviewed the concert, mentioning: “The other solo and concerted instrumental pieces were Joachim’s fantasia on Scottish airs (the same that he played on Monday at the Philharmonic Society); Maurer’s concertante for four violins, performed by Messrs. Sainton, Cooper, Blagrove, and Day; and a duet for violoncello and contrabasso, by Piatti and Bottesini.” The Morning Advertiser [June 3] led with a mention of Joachim’s performance: “Costa conducted the instrumentalists, and of these we may, without invidious preference, mention as soloists Herr Joachim, whose violin fantasia in the first part exhibited a command of the resources and delicacies, as well as the more popular trickeries, practiced on that most marvellous of instruments.” The Windsor and Eton Express [June 5] declared that “Herr Joachim’s fantasia, for the violin, on Scotch airs” was “splendidly performed.”

A third performance came on Friday evening, June 11 in a benefit for the Royal Society of Female Musicians.

The first modern performance of the Irish (Scottish) Fantasy.

The first modern performance of the Hungarian Fantasy