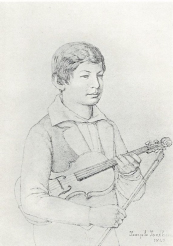 Leipzig remains the most important city for music, and I would advise any gifted young person to go there, where one hears so much music, and music of such good quality.

Joseph took up residence with Hermann and Fanny Wittgenstein and their three infant children, Anna, Marie and Paul, [2] in a large house, Am Markt 14, centre-ville opposite the old Rathaus and just around the corner from Leipzig’s historic Thomaskirche. [ii] The century-old building, with its high upper story and typical Leipziger bay, was considered one of the city’s most elegant residences. [3] There, Joseph awoke each morning like a pearl in an oyster, with all of Old Leipzig — its markets, churches, concert halls, restaurants, shops and schools — lying within a 600-yard radius of his front door.

The Wittgenstein residence faced east across the market square, within sight of Auerbach’s Keller, the famous tavern immortalized in Goethe’s Faust, and five hundred yards from the Gewandhaus and the newly-founded Conservatorium. Hermann’s office was situated an equal distance away in the opposite direction, No. 75 on the commercial street known as Brühl that parallels Leipzig’s old northern wall — a remnant of the ancient via regia that ran from Paris in the West to Kiev in the East. It was a short walk from there to the railway station that was the source of much of Leipzig’s new-found prosperity. A short walk, as well, to the Gerberstrasse: a north-south road that crossed the river where in earlier times Leipzig’s Gerber (tanners) had plied their trade. In the mid-19th-century, the area that encompassed the Gerberstrasse and Brühl was the center of the town’s lively fur and wool trade. Though not a “Jewish Quarter” in the commonly understood sense of the term, it was nevertheless home to the majority of Leipzig’s Jews. [4] At fair time, Brühl, “a street redolent of Limburg cheeses, and as full of gabardined Hebrews as the Ghetto of olden times,” [iv] was the preferred lodging place of visiting Jewish fur merchants, primarily from Russia and Poland. [v] A block from Wittgenstein’s building at No. 75 stood the house Zum Roten und Weissen Löwen (At the Red and White Lion) in which Richard Wagner had been born; [5] nearby was the house in which Karl Marx would one day write Das Kapital. Thus did Leipzig navigate between the poles of art and commerce.

Hermann’s older brother Richard, with whom he was doing business as M. M. Wittgenstein und Sohn, [6] lived with his wife and three children in the Thomaskirchhof, hard by the church and school. Richard’s children were older than Hermann and Fanny’s: the eldest, Johanna, was exactly Joseph’s age, and their youngest, Adolph, was five years his junior.

Across from Richard’s residence, with the Pleisse River flowing at its feet, rose the old Thomasschule where Bach had lived and worked. Between the church and the river stood the new Bach monument, commissioned by Mendelssohn and designed by Eduard Bendemann, a testament to the esteem in which the musicians in Mendelssohn’s circle still held the old master. On the far side of the river, the large, pleasant garden districts that surrounded the old city stretched into the distance. Mendelssohn lived there, in Lurgenstein’s Garden; and just to the north, in Gerhard’s Garden, lived his friend and concertmaster, Ferdinand David.

Thomaskirche and Thomasschule as Seen From Mendelssohn’s Apartment
Painting by Felix Mendelssohn, 1838

For the next seven years, this would be the geography of Joseph’s life. Here, in the “quaint, cheerful and friendly” town that Chorley so vividly described — here, in the pretty, inviting residences “set in gardens, richly dressed and full of flowers” — here, among Chorley’s “kind hearts and distinguished musicians,” Joseph would find the ideal, stimulating, structured and nurturing, environment for the development of his remarkable gifts.

[1] Illustration from Moser/JOACHIM. Note the absence of a chinrest on Joachim’s violin. The chinrest was invented by Spohr around 1820, and did not come into general use until several decades thereafter. An 1833 article in the German journal Caecilia notes that “among many thousands of our currently existing violins, there is barely one with a chinrest to be found.” [Caecilia eine Zeitschrift für die musikalische Welt, Vol. 5, No. 60, pp. 284-285.] Spohr’s chinrest was affixed over the tailpiece in the center of the violin.

[2] Another handful would be born during Joseph’s stay in Leipzig: Josefine, Louis, Karl, Bertha and Clara. The last of the Wittgenstein’s nine children, Lydia, Milly and Clothilde, arrived after the family’s return to Vienna in 1851.

[3] The house, built in 1742, was demolished in 1895 to make room for the so-called “Bismarckhaus,” which in turn fell victim to the bombs of the Second World War. The site is currently occupied by the Breuninger department store.

[4] Despite its complicity with the French in Napoleonic times, the Saxon Kingdom was one of the most regressive areas of Germany when it came to Jewish emancipation. Jews had been banned from Leipzig in 1543, and it was only in the second half of the 18th Century that they had begun to return. In 1800, the Jewish population totaled between 40 and 50. Jews did not receive the right to form religious communities in Leipzig and Dresden until 1837. [Scholz/WAGNER, p. 51.]

[5] The fact that Wagner was born in the house at Brühl 3, in a largely Jewish section of town has been used as evidence for the erroneous belief that he was of partly Jewish ancestry. In fact, the family probably lived there because Wagner’s father, Carl Friedrich Wilhelm Wagner, was employed as a law clerk in the Royal Police office on Brühl. [Scholz/WAGNER, p. 51.]

[6] Hermann’s father, Moses Meier of Korbach in Hesse, the son of Meier Moses of Laasphe in Wittgenstein county, adopted the family name Wittgenstein, probably around 1808, when Jews were required by law to adopt surnames. His wife was born Brendel Simon. According to Brian McGuinness [Wittgenstein/WRITINGS, p. xvii], “The M. M. Wittgenstein Warenhaus was one of the largest businesses in Korbach and the family were rich enough to support a charitable foundation.”