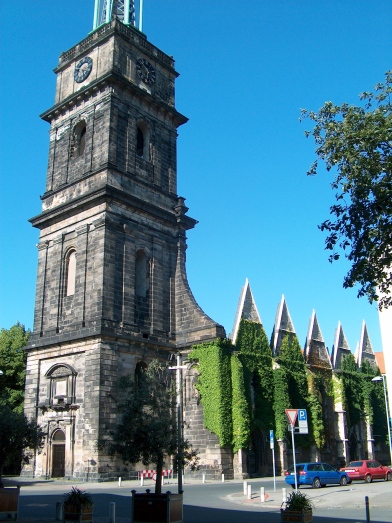 Since 1952 a memorial for victims of war and violence

Shortly before noon on May 3, 1855, Joseph walked to Hanover’s Ägidienkirche, where he was met by the church’s minister, Pastor Ludwig Flügge, and his friend from Göttingen, Arnold Wehner. [1] At a quarter past the hour, Wehnner’s wife, Pauline, joined them, and at half past, the King and Queen arrived, alone and without retinue, from their customary mid-day walk. They all went into the small sacristy where the baptismal font stood, and seated themselves facing the little altar, with Joachim in the middle, the Wehners on one side and the Royal couple on the other. Pastor Flügge spoke. Joseph then affirmed the creed that the Pastor had recited to him, knelt and was baptized Georg Maria Joseph Joachim, adjoining to his the names of the Royal couple, who stood as godparents. His friend Wehner dried his hair with a small towel, and they all went out into the main sanctuary — Pastor Flügge in the lead, followed by Joachim, the Royal couple and the Wehners. There, Joseph knelt to receive his first communion, followed by the pastor’s blessing. After the prayer of thanksgiving, Pastor Flügge presented Joseph with a Bible, bound in silk and secured with a gold clasp, inscribed with his name and the date, and containing a dedication from the Queen. The King gave Joachim a repeating watch, engraved with the ornate initials: G. M. J. — Georg Maria Joseph. He also presented Joseph with a stone from the garden of Gethsemane. [2] Afterward, there were congratulations and touching pleasantries, and then the King and Queen left as they had come — alone. Pauline Wehner recalled seeing the Queen remove her white gloves as she left the church, and change into colored ones. “You really cannot imagine,” she wrote to her brother, “how moving it all was; the preacher is quite excellent. Joachim is such a dear friend to us, and then the wonderful King and Queen, who were so modest and so warmly sympathetic. Afterwards the Queen said to Arnold that she had been pleased that Flügge prayed for us — she would also have done so most sincerely.”

The bell is a gift from the City of Hiroshima

Joachim claimed that his decision to embrace the Lutheran confession was a conscientious one. [3] The way to that decision had been prepared by a progression of respected mentors and relatives: the Böhms, strict Catholics who had answered “to the dear Lord God” for their care of the “heathen” boy, Magister Hering in Leipzig, who, according to Moser, had instructed his young charge as to the nature of Christianity and the character of Christ, the Wittgensteins, who had converted before him and who largely regarded their Jewish heritage as a misfortune that they had overcome, and the Mendelssohns, Protestants who looked upon Christianity as a historical extension of Judaism. [4] As a teenager, Joseph had frequented Leipzig’s Thomaskirche, where he had imbibed the music of J. S. Bach, studying with Thomaskantor Moritz Hauptmann in Bach’s old apartment in the Thomasschule. He had participated in performances of the Mendelssohn oratorios, and mingled with the Christian congregation.

In a letter of April 26th, he told Herman Grimm how his baptism came about:

“I am pleased by the pure kindness of the King, who recently (when I had an audience with him regarding musical matters) was prompted by my remarks on Bach to ask how I, who had been born in a Catholic country, valued his spirit so highly; and when I told him of my Jewish origin and other details of my life, he wanted to know the reasons that prevented me, with my “Christian” nature, from adopting the Christian religion. My main reason, that I dislike calling outward attention to purely spiritual concerns, he disposed of by the way he asked whether he might be my godfather. I feel as though, for the first time, I am free of bitterness, and justified in the struggle against everything that is unattractive about Judaism, against which I become more antagonistic, the more I have to heal the inner, personal damage that I had to suffer, at first unconsciously and later consciously, from my Jewish upbringing. To give oneself freely to the spirit — a joyous martyrdom for it: this seems to me to be the essential character of the religion of Christ — compared with that, everything else is simply immaterial to me — I wished for you and Gisel to be my godparents in any little village church, so romantic am I.” [5]

The baptism, according to Moser, [6] was intended to occur privately, to keep it temporarily from his parents, and was disclosed only to a few close friends. [7] The news leaked out, however, eventually reached the press:

Joseph Joachim to his parents [undated] [8]

A newspaper was sent to me anonymously from Pest, with the news that I have converted to the Protestant church, and in addition — that I am engaged to a Hanoverian court lady, the daughter of Bettina v. Arnim. The second report is a falsehood, and I don’t know who could have taken pleasure in circulating it, and in tying it to my Christian confession. I am not thinking of marrying, and there is no Hanoverian court lady named Arnim.

About my conversion to the Lutheran confession, I owe you, my dear parents, an explanation. I have put off letting you know about it, because I have dearly wished to do it orally in Pest, where I had hoped to see you and my dear siblings in the course of the year, as I still hold out the hope of a visit in Pest around Autumn. I regret with all my heart that you have learned of this important step early, and in such an indelicate manner; I did everything that I could in order to avoid it — and I beg you not to ascribe to a lack of filial respect that which alien curiosity and lack of delicacy may have offended. Presentient fear of such tactlessness [breaks off]

Many greetings to all loved ones. Have you seen and heard Frau Schumann — and how did she please you?

[1] This description follows closely that given in a letter of Pauline Wehner to her brother, Wilhelm Pfeiffer, quoted in Moser/JOACHIM 1908, II, pp. 70 ff. Moser claims that Countess Bernstorff was also present. Moser gives the date of Joachim’s baptism as 1854, but this is clearly wrong, as indicated by letters from Joachim to Herman Grimm in BRIEFE I, pp. 280-285. The correct date is confirmed by reference to Spohr’s precisely-dated letter on p. 281. Thanks to Styra Avins for catching this error.

[2] This stone is still in the possession of Joachim’s descendants. See: Schäfer/GÖTTINGEN, p. 156.

[3] “[…] Joachim felt himself more and more drawn to the religion in which the highest ideal is the love of one’s neighbours. In his innermost heart he had long since been a follower of this sublime teaching, when he told the king, in confidence, of his wish to really become a Christian by baptism.” Moser/JOACHIM 1908, p. 177.

[4] In a letter to his daughter Fanny at the time of her confirmation, Abraham Mendelssohn wrote: “Does God exist? What is God? Is a part of ourselves eternal and does it live on after the other part is gone? And if so, where? And how? — I do not know the answers to any of these questions and have therefore never taught you anything concerning them. But I do know that there exists in me and in you and in all human beings an everlasting inclination to everything that is good, true and right, and a conscience which admonishes us and guides us when we depart from the good. I know this, believe in it, and live in this belief; it is my religion. This I could not teach you, and no one can learn it; everyone has it who does not deliberately and knowingly cast it away. […] This is all that I can tell you about religion, all that I know about it. […] The form in which your religious instructor has conveyed it to you is historical, and like all the creations of mankind is changeable. Several thousand years ago the Jewish form was the dominant one, then the pagan, now it is the Christian. We, your mother and I, were born in Judaism and raised in it by our parents, and without having had to change this form we have followed the God in ourselves and our own consciences. We have raised you and your brothers and sisters in Christianity because it is the form of religion accepted by most civilized men and contains nothing that might lead you away from the good; on the contrary, much that guides you toward love, toward obedience, toward tolerance and toward resignation — even if only in the example of the Author of the religion, an example recognized by so few and followed by still fewer.” [HENSEL/Mendelssohn, Vol. I, pp. 79-80].